Wherever I Look......Déja Vu All Over Again

IT'S A MIRACLE that one of these posts ever gets completed.  A good writer edits and and narrows down the material, I just keep travelling in ever widening circles, ever further from the point. 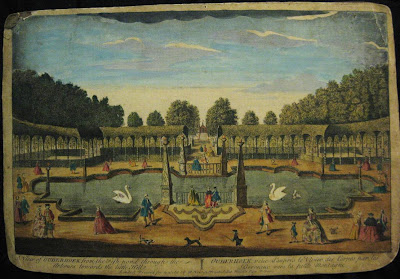 View of Ouderhouk by D. Voisin
FOR EXAMPLE:  It all began last week.   I bought this little 18th century print, above, of an elegant garden at Ouderhouk in Holland.  I have always been enchanted by these highly stylized pictures, with their awkward perspectives of nature tamed and pruned to an ideal of order.  Thinking of the collection of such prints in the reception room at Beatrix Farrand's Reef Point, I thought I might do a little research and write a post about 17th & 18th century garden prints. 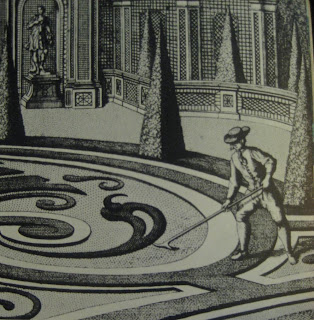 BUT, that very evening appeared a photo of a thrilling 18th century table once part of the inventory of Syrie Maugham's shop, with a scene based on one of these prints on its top, executed in glass beads. Hmmm, a post about decorative objects based on antique garden prints---much more interesting.  We'll go with that. 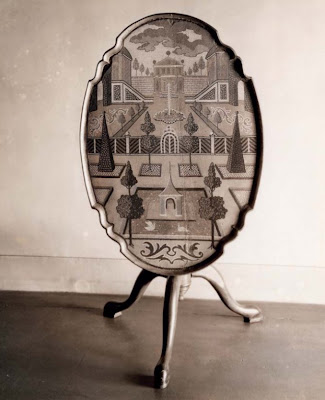 Tilt-top table, with glass bead inlaid top, 18th c.
THEN, up popped this wonderful picture of a young Beatrix Farrand wearing a dress that would still be plausible in couture today (think Lacroix, sweetie), again taking inspiration from an 18th century garden print...

Beatrix Jones, later Farrand, in a dress inspired by antique garden prints in 1895
ONE WOULD THINK that I could stop here, a quick and neat little post about designs influenced by early garden prints complete, having made my connections.....


BUT NO, not exactly. Today I am going to take you behind the scenes, to what really happens when I start a post.  Once I had placed the pictures in the post, seeing Beatrix Farrand and Syrie Maugham in such close proximity started me off on a tangent before I could push the 'publish post' button....
Oops.  This space reserved for a picture, temporarily misplaced, of Mona Williams New York Drawing Room by Syrie Maugham

BOTH women did work for the famously stylish Mona Travis Strader Schlesinger Williams von Bismarck Schönhausen de Martini von Bismarck, hereafter referred to as MTSSWvBSdMvB (I expect a special award for pulling that one off).  Farrand designed a Chinese Garden at MTSSWvBSdMvB's Oak Point estate at Long Island, where, to cut down on costs during the Depression, the then Mrs. Harrison Williams (Mona Travis Strader Schlesinger Williams to you) of whom Cole Porter sang "what do I care if Mrs. Harrison Williams is the best dressed woman in town?", tore down the main house and converted her indoor tennis court and pool to a smaller, more easily managed weekend house, the tennis court becoming an indoor garden, and the pool a gigantic living room. 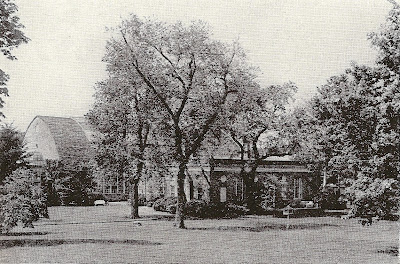 Above & Below: The Tennis House at Oak Point, the Harrison Williams estate at Bayville, Long Island (House & Garden, May 1948) 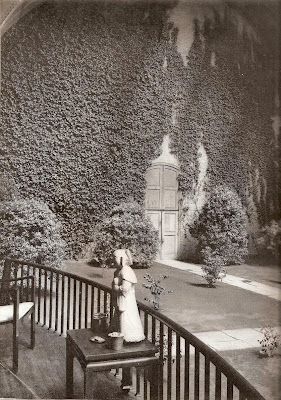 I DON'T KNOW if Syrie Maugham did the decor at Oak Point, but she did  do the interiors of  both MTSSWvBScMvB's Palm Beach and New York houses when she was still just MTSSW.  Which reminded me that the Williams's lovely New York house had originally been designed by Delano & Aldrich for Mrs. Willard Straight, née Dorothy Whitney. 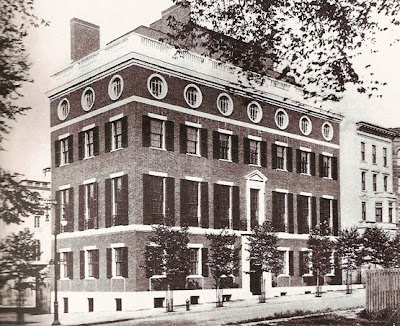 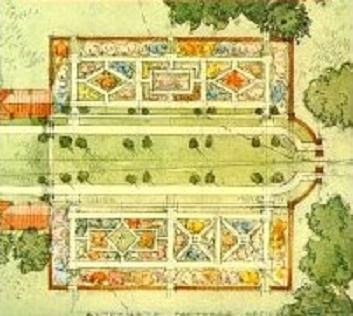 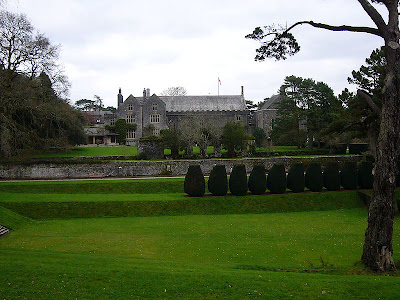 Dartington Hall
WHICH reminded me that Olive, Lady Baillie, who owned Leeds Castle, was Dorothy Whitney Straight Elmhirst's niece.  Lady Baillie hired neither Farrand for landscape nor Maugham to work on the famous interiors at Leeds, but rather the French firm of Jansen.  Whew.  I can stop here. 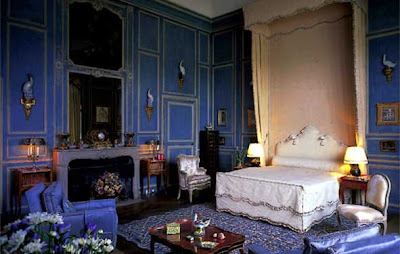 Lady Baillie's Bedroom at Leeds Castle
OR CAN I?  For MTSSWvBSdMvB's Palm Beach house was purchased by Jayne & Charles Wrightsman, who had Jansen do work for their various homes, but no, I'm going to resist...keep resisting...maybe a picture of Denning & Fourcade's redecoration of Maugham's design for the Palm Beach drawing room?  No, be strong, resist....(however, for those whose curiousity is whetted, it can be seen in a post at the Peak of  Chic by clicking here)  Maybe a photograph of the Blue Room at the White House, as redecorated by Jansen and paid for by the Wrightsmans during the Kennedy era?  No, no, too tangential....although Beatrix Farrand did work on the White House Rose Garden in the earlier 20th century, later redesigned by Bunny Mellon, who.......
OKAY, avoided that one.   But it does occur to me that Mrs. Dorothy Whitney Straight Elmhirst was the sister-in-law of sculptress Gertrude Vanderbilt Whitney, founder of the Whitney Museum, who had Delano & Aldrich, architects of the town house later owned by MTSSWvBScMvB, (the one decorated by Syrie Maugham, whom we seem to have lost several left turns ago), design the most enviable artist's studio imaginable on the Whitney estate at Old Westbury, Long Island.  I have no idea who did the interior decor or the gardens there, so maybe here we can stop, although there is a strong temptation to tangent off to the wonderful murals, by Robert Chanler and Charles Baskerville, that adorn the studio.  Charles Baskerville was the cousin of a friend's mother, after all...And the Chanlers!  There are several days' worth of tangents there.
Gertrude Vanderbilt Whitney Studio, Old Westbury, Long Island (from American Homes of Today, by Augusta Owen Patterson, 1926) 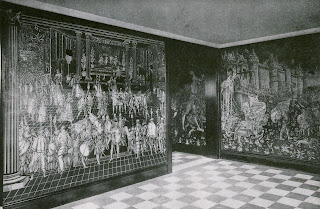 
JUST as I think I can reign this in, and am about to cut the post back to its original size, damned if I don't remember that Gertrude Whitney was the aunt who gained custody of Gloria Vanderbilt in a famous court battle decades ago.  Which reminded me that Gloria Vanderbilt is Anderson Cooper's mother.

AND NOW, my purchase of a print of a Dutch garden having led me to six degrees of separation between Syrie Maugham, Beatrix Farrand, and Anderson Cooper, I'm going to quit while you're still reading. 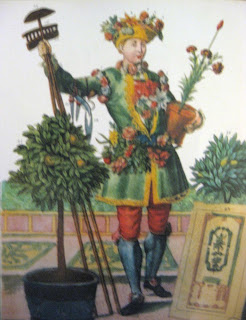 Portrait of the Dilettante preparing this post
Posted by The Down East Dilettante at 4:14 PM

DDE- you could go on for days following these threads- to the utter delight of your adoring public. There are truly six degrees of separation in the world- but I think only two in the world of the stylish.

So much fun. Keep it up so the rest of us can travel along on these journeys.

You have GOT to be an Aquarian?

and BWS, you and Magnus fasten your seatbelts, it's going to be a bumpy trip

Author, my friends would argue tangled more than intertwined

I read this at two this morning and again at breakfast and I must say you outdid yourself - it's a beautiful piece of writing.

Yes indeed, the Dilettante out-dilettanted himself
this time!
My head is spinning, but in a good way.

LOVED IT!!! Thanks so much for all of the sleuthing. What fun it was to read.

Wow! My head was spinning so fast after reading this I thought it needed a seat belt. What fun. Love the way you think—and write. Bet you gave your elementary school teachers fits!@$#%

Over martinis, the Dilettante once linked me, a girl from an extremely humble suburb of Los Angeles, to Brooke Astor in 6 steps, through people connected by blood or marriage. A Dilettante connection --what a great idea for a door prize!

Michele, thank-you also, it's fun to do sometimes. I'll stick to the subject more next time.

Toby and Home Before: As I said to Magnus and Barbara, fasten your seatbelts! And home before, correct about the teachers. Oh so correct...

Sidekick, my love, it was only five degrees---your sister's husband's great-aunt was married to Vincent Astor's 1st cousin.

HI-larious! I say, DED, you have outdone yourself with the antic brilliance of this deliciously delerious post. It recalls the "Nightmare" song from Iolanthe, or other such notable G&S crazed patter songs. Reggie

We love you mind! Of course the new Syrie Maugham is on my "to buy" list and I keep searching for a CHEAP copy of the Mona Bismark monograph and I want the garden print dress, but to remake as a lovely table cloth. You have totally exhausted me!

Yes, I must agree with Reggie. Lol
We have all been there.
Thanks,
Always Bumby

Pure perfection. This is better than any dinner party game. There are visuals!!!

I love garden scenes. They are so dainty and playful. Wonderful post.

What a great journey this was! Thank you so much for the alerts so I wouldn't miss these. ~ Ruthie