Note:  Because I have included an unusually large number of photographs in this post, I have kept the picture size smaller than usual.  Please click on images for larger detailed full size views. 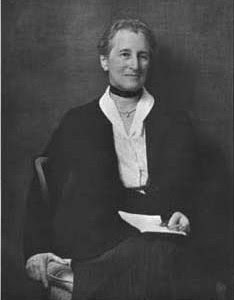 Beatrix Farrand in the 1940's, from The Reef Point Bulletins
I made my annual pilgrimage to the Asticou Azalea Garden on Mt. Desert Island a few days ago.  I was a little late this year---an early summer and almost endless sunshine ensured that the usual Memorial Day peak of this garden had actually come a week before.  Do not misunderstand.  It was still ravishing, as the photographs will show.  The story of how this lovely spot came into being, as a rescue effort,  is an interesting one.

The great garden designer Beatrix Farrand had a lifelong love affair with Maine, having summered in Bar Harbor since early childhood.  Her feeling for the rugged landscape inspired much of her best work in a series of subtle gardens that blended into their rugged settings.  Her own Reef Point estate, inherited from her mother, was for many years her laboratory, where she experimented with design ideas and plantings both native and exotic. 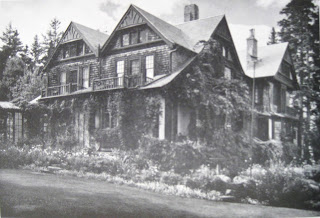 Ocean front view of Reef Point (Reef Point Bulletins)
It was her hope to turn Reef Point, its extensive library, and collection of gardens into a foundation for the study of plants and landscape architecture, and to that end a board was formed, renovations were made to house and grounds for their future use, staff was hired, and plans were made for a distinguished future.  In addition to the plants and gardens and extraordinary library, the collections included the papers and plans of the English designer Gertrude Jekyll, which Mrs. Farrand had purchased at great personal expense when they were threatened with certain dispersal. 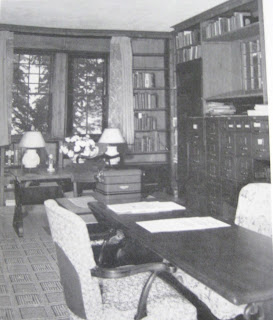 A corner of the Library at Reef Point, as refitted for public use (Reef Point Bulletins)
Over one decade in the 1940's and 1950's, the world, and Bar Harbor, as Mrs. Farrand had known it, changed irrevocably.  A World War followed the Great Depression.  Two years after the end of the war, a forest fire devastated much of the town, destroying many of the estates of her friends and clients, and when the town re-built, it was not as a fashionable resort, but as a tourist destination.  Motels sprang up on the ruins of the estates, and masses replaced classes on the Main Street.  Not liking what she saw, worried about the future endowment ( the only niece of Edith Wharton, Mrs. Farrand was  not wealthy by the standards of the world she inhabited), and feeling that the new, less rarefied Bar Harbor, geographically remote, was not the appropriate location for the endeavor, she shut down the foundation in 1956. 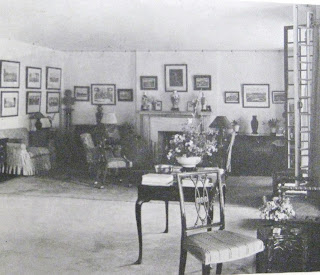 The Blue Reception Room at Reef Point, with some of Mrs. Farrand's large collection of 18th century landscape prints on the walls. (Reef Point Bulletins)
She donated the library, the vast collection of landscape prints of three centuries, and the Jekyll archives to the documents collection at the University of California at Berkeley, where her husband, historian Max Farrand had taught.  She had the main house at Reef Point demolished. She herself arranged to retire to the family farm of her horticulturalist, Amy Garland, building an apartment between the Garland's house and barn, where she would live with her personal maid, Clementine Walter.  To create this new home, Farrand used salvaged architectural elements from Reef Point, and created an intimate garden, with many of her beloved roses, perennials and heaths and heathers, also brought from Reef Point.  Here Farrand died in 1959. 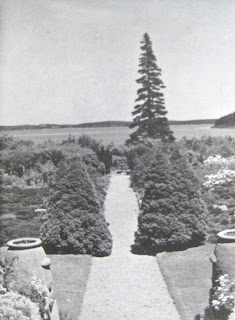 View of main garden axis from house at Reef Point, looking across heather plantings to Frenchman's Bay.  Urns in foreground are by Soderholtz (more about Soderholtz here) 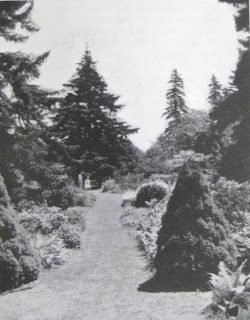 Another garden path at Reef Point.  The undulating edges of the flower borders, mimicking the edge of the forest, and the way the cultivated seemlessly blends to the natural, is deceptively simple, and brilliant. (Reef Point Bulletins)
Meanwhile, Reef Point was to be sold, and remaining there was the bulk of Mrs. Farrand's plant collection--(as late as the 1970's, I remember being struck by the perfect  effect of a Laburnum,  Golden Chain tree, over the fence, framing a view on shore path in front of the former Reef Point), including her remarkable collection of Azaleas and Rhododendrons.  Enter, to the rescue, the remarkable Charles Kenneth Savage. 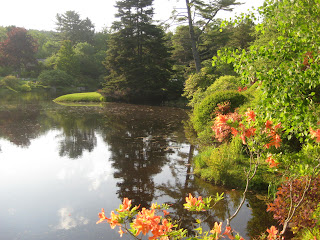 The pool at the Asticou Azalea Garden
Charles Savage's family had long lived in nearby Northeast Harbor, where they owned the Asticou Inn, a big old shingled summer hotel.   Young Savage, noted for artistic talent at an early age, was at boarding school in Boston when his father died, and at the age of 17 he returned home to help his mother run the inn.  Savage, who loved the island, and its unique landscape, became friends with many of the leading talents of the day on Mt. Desert, notably Farrand, and landscape architect Joseph Curtis, who summered on the hillside just beyond Asticou Inn.  From both, Savage absorbed important lessons in the principles of landscape design, and the importance of using native plants and materials.   When Curtis died, leaving his property, with its carefully designed trails (a future post) as a public trust, Savage was its first trustee, and for many years the presiding genius of the place.  He also had a seat on the board of The Reef Point Foundation, and when Farrand decided to dismantle her life's work, Savage was given a year to rescue what plants he could. 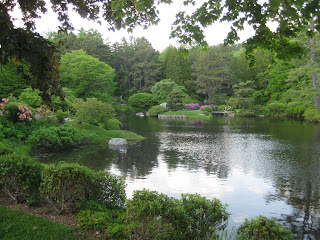 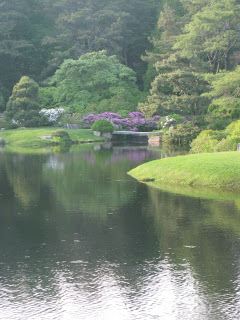 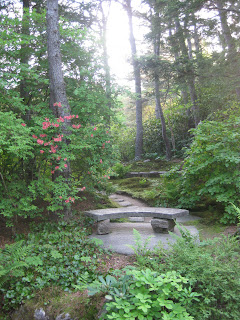 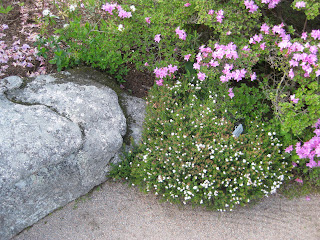 Casting about for a site, Savage seized upon the alder swamp across the street from his family's hotel, and armed with his ambitious plan, approached neighbor John D. Rockefeller Jr. whose own garden had been designed 25 years previously by Farrand, and Rockefeller agreed to finance the project. 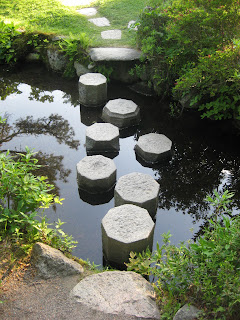 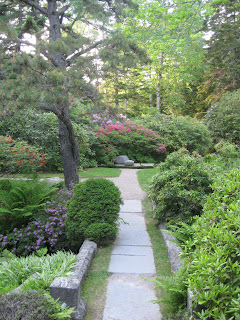 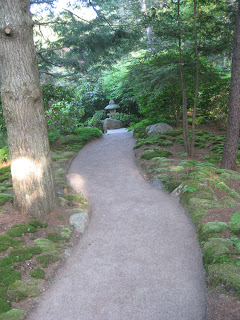 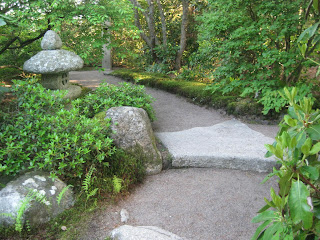 Paths at Asticou
Savage, using the lessons he had learned so well from Farrand & Curtis, dredged the swamp to form a pool by the road, with the garden in the distance.  He conceived it as a Japanese stroll garden, harmonious with the rocky spruce clad landscape surrounding it.  A stream, with a gentle waterfall was formed, crossed by two bridges.  Savage, a talented sculptor in wood, had a particular feeling for stone, and selected many pieces of worn granite for integration into his design.  In this framework were planted azaleas, rhodendendrons and other shrubs from Reef Point.  A Japanese sand garden, inspired by one in Kyoto, was a surprise as one traveled the carefully raked gravel paths. 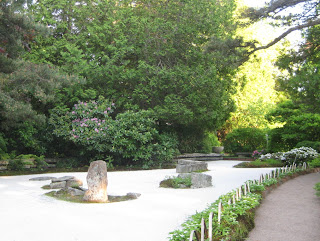 Two views of the sand garden at Asticou 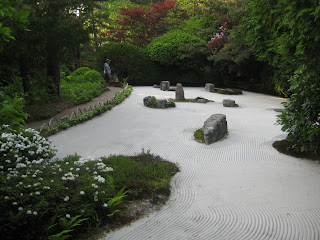 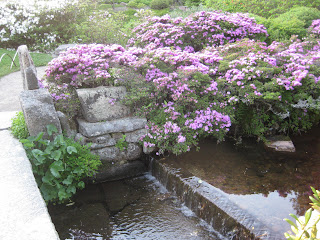 A detail of stonework at waterfall at the South Bridge at Asticou, featuring Rhodendendron Kiusasianum
After Savage's death, stewardship of the garden passed to the Mt. Desert Land & Garden Preserve, funded by the Rockefeller family to maintain this garden, another Savage garden at Asticou (future post), and the spectacular Farrand garden designed for Abby Aldrich Rockefeller on their estate in neighboring Seal Harbor. Several additions have been made to the garden in recent years, notably a new entrance by Patrick Chasse from a parking lot at the rear of the property. 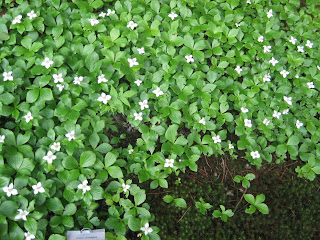 Cornus Canadensis, Bunch berry, a favorite native ground cover of Farrand (and of the Dilettante) 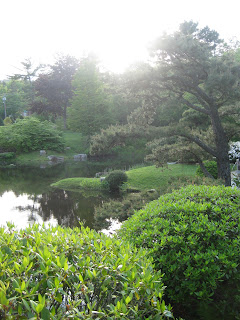 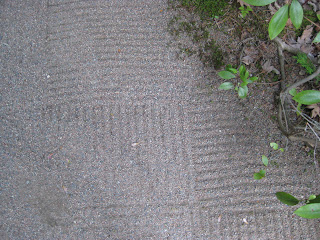 Paths of finely crushed native pink granite are raked in patterns each morning, as they have been since Charles Savage's day. 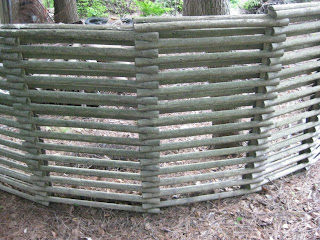 An interesting fence screens the work area from the gardens
Do not adjust your sets.  The picture is not upside down.  Sky reflected in pond at Asticou 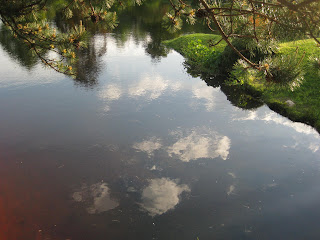 Posted by The Down East Dilettante at 11:15 AM

what a gorgeous garden: a great place to spend a beautiful day!

Just last week I was toying with the idea of adding another Beatrix Farrand book to my collection and thinking that no one ever posts about her! I can always count on you to be right there with the cool info!

Stefan, it was indeed beautiful, and stimulating, and don't forget, I had that crab roll after!

Lucinda, the new Farrand book is a winner, so run, don't walk, to your local bookseller to buy it. Also, if you don't know about it, the Bulletins of the Reef Point Gardens, republished a few years ago, are also wonderful---including some of Farrand's own writing.

What a fun post! Asticou and Thuya gardens are such beautiful, peaceful places to enjoy. Small spaces with a lot of personality. So many times I have walked along Shore Path and wondered just how magnificent an impact Farrand's garden made to that famous walk. I think she would be very pleased to know that many of her beloved plants endure to this day, and her work is appreciated and studied by so many people today.

This does look like a beautiful spot! Waiting to hear what you have to say about the Kluge house ....

Thank you for the walk—no romp—through such loveliness. Such a complicated thought to destroy one's life work of living, breathing plants because it could not be saved to one's idea of perfection.

Delicious post, DED, thank you. Lot's of work and research obviously went into it. I, like Chip, eagerly await your take on the Kluge sale, which is well-reported on in Emily Evans Eerdmans' blog. Reggie

Beth, unfortunately, though she was not a mean lady, Mrs. Farrand was not actually all that fond of the masses, and that six foot wall that separates the estate from the Shore Path was her creation. The people she pictured enjoying her garden were researchers and horticulturalists and garden club ladies, not the casual visitor. The elevation of the house ensured fine views over the fence nearly invisible from the house, and no views from the other direction.

Charles Savage's vision for Asticou and Thuja was a far more democratic and community spirited one.

Chip, I may not do the post. It was going to deal solely with the exterior architecture to its definite detriment, and just keeps coming off as sort of mean, so I've back burnered it.

Reggie, Emily's reportage on the interiors was spot on, and my intent, as above, was entirely to do the exterior architecture, which despite Mr. Easton's serious decorating talent, is a really dreadful piece of architecture.

Absolutely beautiful post. Information shared in the most inspiring manner. Thank you.

Wonderful post about those most ephemeral of creations- gardens. And kudos to Charles Savage and the Rockefellers for preserving this one- and to you for bringing its glories to those of us outside the State who had, like me, only heard of it in passing. It's clearly worth a trip to see.

And I'm disappointed that we won't be seeing a post on Mrs. Kluge's house-America's most storied McMansion, although I applaud your "if you can't say anything nice.." attitude. There's something about the house and estate...and its owner that seems to make us all view it with relish- and not of the nicest sort.

Barbara, thank you, but beautiful and inspiring spots write themselves

Magnus, there is another garden by savage, also open under the auspices of the foundation, yet to come. Definitely must-sees in this part of the world.