Mies van der Rohe said, 'Less Is More'.  Coco Chanel said, "Elegance is Refusal".  Alexander Pope said, "Consult the Genius of the Place".  Here in Maine, we say, "If it ain't broke, don't fix it".  They all add up to essentially the same concept, and they're all good advice.  You see where I'm going with this?
I clipped this photo from a Sotheby's brochure a few years back.  I don't remember where it is, exactly, somewhere in Massachusetts.  I saved it, because I thought it that the house was maintained with perfect pitch.  The color scheme is clean and simple....a nice soft yellow that suits the architecture and the New England light, with the dark shutters and white trim.  No replacement windows,  no ill fitting, artificial looking plastic shutters standing in for the real thing, no hideous color scheme off the Benjamin Moore exterior  charts, which should all be gathered up and burned. 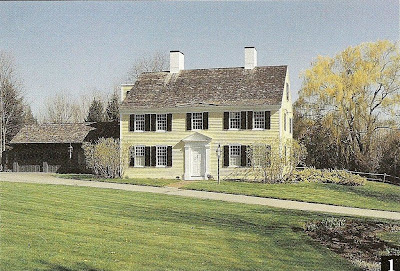 We interrupt this blog for a public service announcement:  If you own one of these fine old houses, do not, repeat, DO NOT use those silly, scale destroying, inoperable plastic shutters.  I don't care how much peer pressure the neighbors put on you to have shutters.  If you don't want the nuisance of repairing real shutters, fine.  Just don't have shutters.  The damned things look worse than false eyelashes and pasties on Whistler's Mother.  The old houses have fine enough proportions and moldings that they will look very well with nothing at all, and far better than with fake shutters that are inevitably ill proportioned and placed incorrectly and just make the house look artificial, tacky, and wrong..  Have I made myself clear, class?  Now back to our scheduled program.
The landscaping is fine here, too.  No attempts at anything cute, or 'colonial', also known as Phonie Colonie.  It follows the good New England tradition of simple planting, no pyramids of yew with variegated foliage euonymous at the foundation----the lilacs and low old fashioned seasonal plants allow the strong lines of the house to meet the ground in an elegant fashion.  If you want a lovely little formal garden, or flower borders, put them on an axis with a window or doorway, and don't jam them up against the front of the house.
And, if you need to add more room, don't feel that you need to order every arched window in the Marvin Catalog.  You don't want your addition to be the tail that wags the dog.  If it's Versailles or a McMansion you want, buy Versailles or a McMansion.  Leave these poor old houses alone, to continue to grace the countryside.
This concludes our first seminar in how not to mistreat a fine old building.  If you are one of those brilliantly talented people who can break these rules and make something spectacular and charming, more power to you.  Most of us can't, and shouldn't.
Posted by The Down East Dilettante at 5:17 PM

And do not, under any circumstances, let your contracter pursued you to replace "all those old, leaky wooden windows" with new anodized aluminum or vinyl ones with plastic snap-in muntins. It has been the ruination of many a fine old house, making them look like they've been punched in the face.

Amen and while we're at it, lets shoot a few architects with overactive protractors!

I meant persuade, not pursued!

You know, it's Diana Vreeland who is usually credited with 'elegance is refusal'...but most likely Chanel said it before her--and even likelier, someone chic like Madame de Stael or Mme de Pompadour said it before them...and so forth.
Love your blog and will add you to my blog faves.
cheers, DIANE
www.thestylesaloniste.com

Started laughing and nodding my head at the bit about the color charts - thank you.

Reggie: Absolutely. I intend to 'persuade' this in a future post. Windows are #3 in this series, right after replacement doors, which are turning out to be an even greater evil, because they so often take the pilasters and entablatures with them.

Smilla: We don't shoot architects anymore. It's been against the law since 1906. We take away their window catalogs and sentence them to a four year course of the Dilettante's Design Don'ts Seminars.

DDS: Welcome! I have been a happy visitor to your blog many times. I too, thought that la Vreeland said it, and have so quoted her for years, but when I went to fact check the quote before I published, it turned out to be Chanel.

Anonymous: You gather up the charts, I'll get the kindling for the bonfire.

Don't ever let any contractor convince you to replace your original clapboards with new ones. There is nothing, I repeat, NOTHING, on the market to day that will compare to the old clapboards. Clapboards do not fail, paint does, address the reason for paint failure which 99% of the time is moisture, don't replace clapboards. IF YOU DON'T WANT TO DEAL WITH THE UP KEEP AN OLD HOUSE COMES WITH, DON'T BUY ONE, BUILD/BUY NEW!
Thank you for this post, well said, it should be sent to every person buying an old house every where!