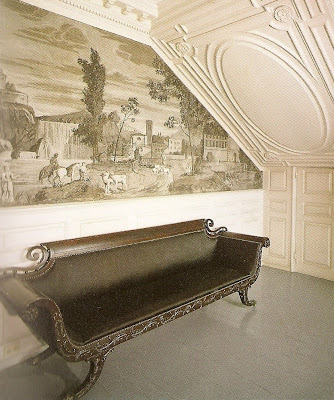 One of the handsomest 18th century houses in Portsmouth, a town rich in handsome 18th century houses, is the Moffatt-Ladd house, built by Captain John Moffatt in 1763, and acquired from his descendants by the  Society of Colonial Dames, who have maintained and displayed it well ever since. 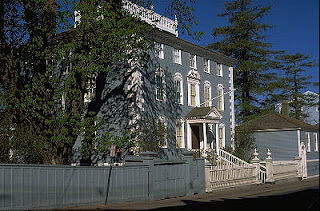 Moffatt built it on a rise across the street from his wharves on the Piscataqua River.    The mansion's riches are many---superb family portraits by Blackburn, a rare and gorgeous set of Chinese Chippendale furniture, superb woodwork, and an intact 19th century terraced garden running uphill from the drawing room at the rear. 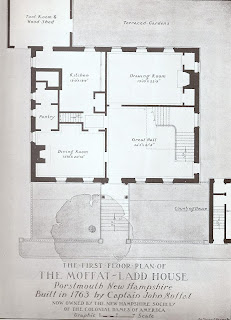 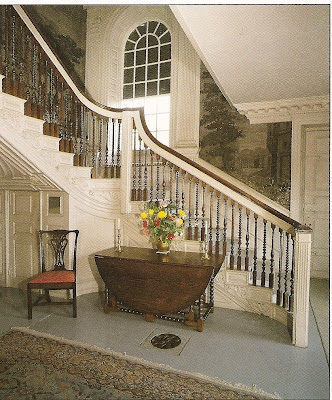 But, the star of the house is its entrance hall, one of the grandest to survive from colonial New England.  Rather than running through the center of the house in usual 18th century fashion, it occupies more than 1/4 of the first floor, allowing for an exceptionally broad two-run staircase, with superb carved details and a great arched window on the landing.  In the early 19th century, a scenic wallpaper, probably Dufour, depicting the Bay of Naples in grisaille was added.  The effect is tremendous, the harmony between the Georgian woodwork and the sweeping classical panoramic wallpaper unexpectedly fine. 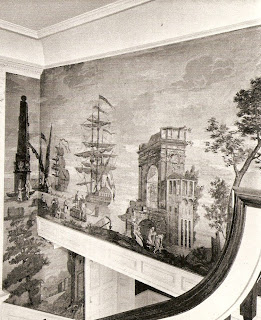 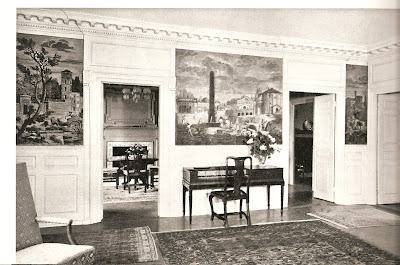 The room has been famous since the first wave of interest in things Colonial hit.  It was photographed by E.E. Soderholtz for his pioneering book of early photos of New England houses, it was painted by Walter Gay, the expatriate artist better know for his associations with Edith Wharton and Ogden Codman, and practically any book of early American architecture includes an image.   And so it should be, for it is a very beautiful room, with its shuttered side door leading to the counting house in the garden. 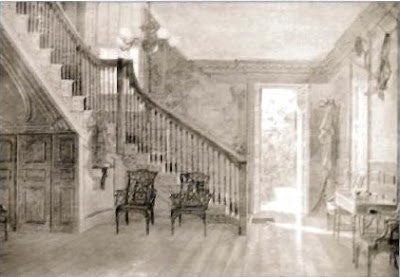 Curatorial changes have been made over the years.  While the interpretation of the interiors at Moffatt-Ladd is first rate, one feels a bit sad that the beautiful Colza lantern was removed, and I confess to being a bit sorry that the arts & crafts Stickley rugs, one of my favorite rug designs, in black and tan, a perfect complement to the paper, had to be removed, replaced by an oriental rug probably not a bit more authentic. 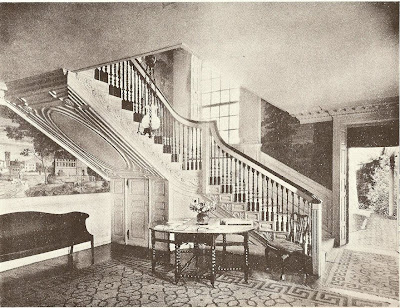 All this is minor aesthetic carping however.  If you're in New England next summer, go see the room.
Posted by The Down East Dilettante at 12:44 PM

Several summers ago Boy and I made a pilgrimage to Portsmouth to see the houses, and this was one of the highlights of our visit. Marvelous, indeed.

I am in agreement about the rugs, I think a better mix definitely. I am enjoying your posts immensely. Let's get wallpaper Back on the walls this year. I am planting the "little" trees. G

As soon as this weather clears
I'd like to spend the night in Portsmouth It's about a three hour drive from Rockland. Is that
House open now for tours this time of year.?
Your post is sooo interesting.
Yvonne

Thanks to your wonderful post, the Moffatt-Ladd house is now on my list of places to see. Once there, I will probably have to be pried away from the entrance hall!

La Petit, I'm afraid the Portsmouth houses are only open from mid may to mid october...but well worth the visit. My three personal favorites are Moffat Ladd, Warner (see my post about the smalt room there a couple weeks ago), and the Hamilton House in nearby Berwick. All very beautiful, with beautiful grounds too

Smilla, you ought to grab JCB this spring and do the houses. And trust me, there is much more at Moffat Ladd that will catch your fancy.