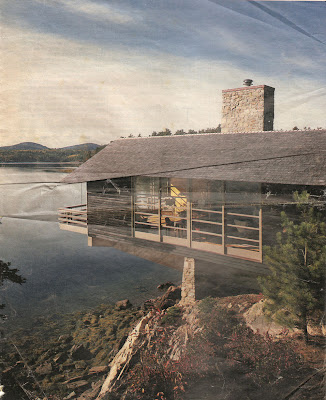 View of cantilvered living room wing at Fortune Rock (New York Times)
Only 7 miles and 10 years separate the gilded splendors of Wingwood House at Bar Harbor ( parts 1, 2, & 3) from this exciting house.  Both were built for wealthy women prominent in their respective worlds, both were designed by Philadelphia architects.  Both take inspiration from a Maine vernacular.  There the resemblance ends. Wingwood looks back to a romanticized past, Fortune Rock looks forward to an ideal future.  They provide interesting case study in the range of architectural aspirations. 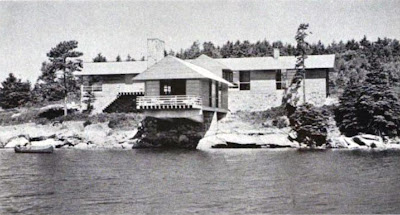 
Fortune Rock was designed for Wells Fargo heiress Clara Fargo Thomas, who had achieved reknown as a muralist and scenic designer.  The architect was famous modernist George Howe, who had started his career with the firm of Mellor Meigs, and Howe, famous for their elegantly conceived, texturally rich houses in the Philadelphia area.  Construction of Fortune Rock started in 1937, making it contemporaneous with that more famous cantilevered house, Fallingwater.  The Thomas house sits long and low at the edge of a bluff, looking out to one of the most spectacular views on the entire east coast, Somes Sound, a fjord-like body of water that splits Mt. Desert Island in two. 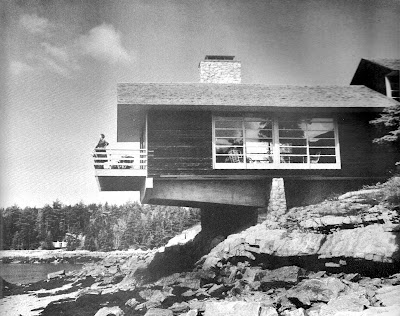 Clara Fargo Thomas on the balcony (Down East)
The house is built of vernacular shapes and materials---clapboard, granite, gray shingles, all of which anchor it to its location.  The way these shapes are assembled is almost cubist, and the house's defining feature, a spectacular living room cantilevered out above the sound, give the house its modernist credibility.  For the interior, veneered plywoods were used for all walls and shelving.  Exterior walls were stained gray, the underside of the eaves, and the ceilings were a gray blue that answered the sky.  In the spectacular living room, the lines between structure, nature, and outdoors and indoors were completely blurred.  On three sides, large sliding doors opened out, floor to ceiling, with only a railing at the sides.  The walls were mirrored, with a grid that echoed the panes of the windows, making for a seamless view of the outside. It was impossible to tell at first glance where one began and the other ended. 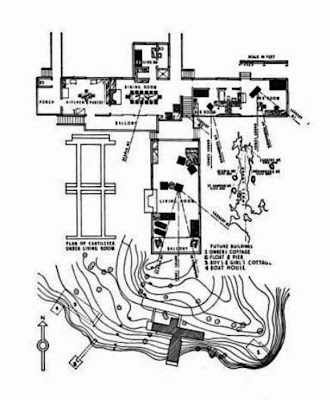 The original intention was that the house be the central building of a larger family compound, a vision never fully realized, although Mrs. Thomas's architect son did build his own very interesting house sitting astride a small cove, looking across to his mother's house in flight above the water. 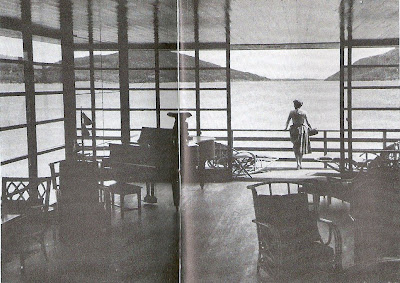 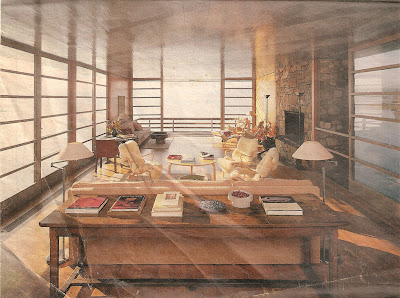 Living Room (New York Times)
A mural in the dining room/entrance hall was by Mrs. Thomas, showing the wreck of a ship owned by her husband's ancester.  The wreck was off Fortune Rocks in southern Maine, giving the house its name. 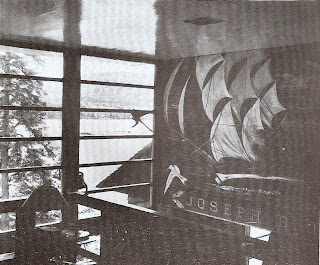 Dining room, with Mrs. Thomas's mural of the wreck of the Joseph B. Thomas (Down East)
In the 1980's the house was purchased by a member of the Berwind family.  Nothing could be further from the splendors of his great uncle's palace at Newport.  The Berwinds undertook a sympathetic restoration and re-decoration of the house, by then time-worn.  Missing was Clara Fargo Thomas's spectacular mural from the dining room. 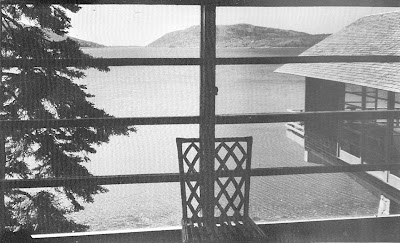 View from Dining Room (Down East)
Personal Note:  I had dinner here in the 1970's, when Norman Mailer was renting the house from the Thomas heirs.   I was in my early 20's, and very shy in front of the pugnacious celebrity.  After all, he did punch Gore Vidal..... 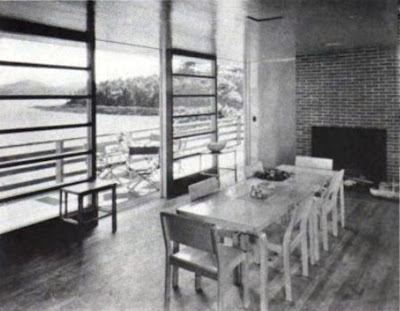 
For readers hoping for literary anecdotes, I remember very little: just that Mailer was very much as one would expect.  That he considered it an interesting cocktail hour entertainment/exhibition to hang his young sons by the arms over the balcony until they yelled (uncomfortable around heights, I could only think about what would happen if his grip slipped), that his children had ravishingly good manners, that the woman named Carol who was living with him was charming, and that he had just publlished Marilyn, and that after all other attempts had failed, he tried to engage me at table in a conversation about Pat Nixon  and how lovely she really was, to which I had very little to add.  How could I have?  I was too engaged by the house, taking in its amazing proportions, planes, and materials---and that view!- to concentrate on Norman Mailer.  Bad dinner guest, I admit, but I mean, really......Norman Mailer or an iconic modern house?  You tell me. 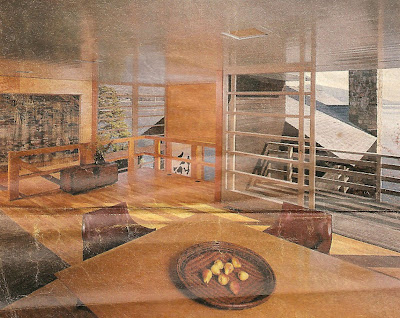 The color photographs of Fortune Rock are from a 1987 article in the New York Times.  Unfortunately, they were damaged in my files, and I was unable to straighten them for good scans.  But they show well how the house's design holds up against contemporary work. 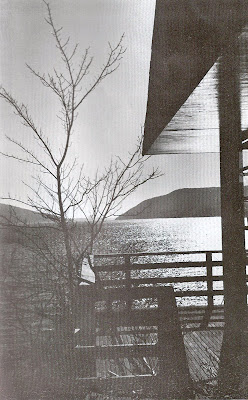 The view south down Somes Sound (Down East) 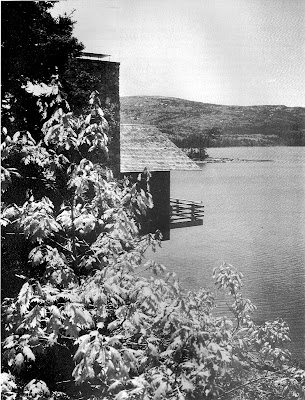 Posted by The Down East Dilettante at 9:58 PM

I remember seeing a photograph of this house somewhere once and wishing I could see more, so this is a real treat. Really beautiful! I love the way it just hovers over the coastline.

I'm miserable about the wrinkled photos from the Times. It's an amazing feeling in the living room...with the doors open, and the mirrors reflecting, one really does feel as if suspended above the water...oh, wait, one is...

I'm delighted to find this! When I was a child, my family spent several summers at Fortune Rock as guests of Clara Thomas. I recall being both terrified and thrilled by the living room 'that hung out over the water.' It is a gorgeous house. Thanks again!

Bissie, thanks so much for stopping by, and how lucky your were to spend time there. An architect friend mentioned just the other day that he considers it the best 20th century house in Maine

i'm reading about this home in Norris Church Mailer's memoir, A ticket to the circus. thanks for the photos and floor plans, i'm so glad to happen upon them online.

Thanks so much for this! My mother is the designer who did the renovation of this house for the Berwinds in the 80s and I got to spend several summers at Fortune Rock with her as she worked. I fell hopelessly in love with that house as a little girl, and I've never quite gotten over it. :)

WOW!! I had never seen nor heard of the place!! You never cease to amaze me!! And you apologize for the wrinkles?? HA!!

The mural that of the wreck of the Joseph B Thomas was salvaged years ago and installed in the den of a house on the Oregon Coast. It survives!

The house is just amazing

Anonymous, your comment about the mural survigal just caught up with me---many thanks!

In 1974 to 1977, when Tom and Eitel owned it my mother used to clean the house and take me with her... I cartwheeled were all the mirrors over the ocean once where...It is very beautiful.Tom and Eitel used to give me there subscritptions to all of there childrens books. I loved them dearly..

I have had the pleasure of staying at Fortune Rock several times in the past few years. Its views of the constantly changing sound are spectacular. One often feels like they are in a splendid tree house with a birds eye view of the water below. The home has never lost its integrity to the original owner and architect.