Intermission: When Lilacs Last in the Dooryard Bloom'd

While I work on a couple of new posts, I present this intermission.


Yes, I know that almost every blogger on the planet has done a lilac post in the last few weeks, but I don't care---they're in bloom here now, and I am in love all over again, and I want to share it.  The poor quality of the photographs will also show why the Dilettante rarely uses his own pictures. Many of the lilacs shown here have been blooming in their spots since the 19th century---and even the younger lilacs pictured at my yard are descendants of older plants at my grandmother's or the farm across the street, built in the 1790s.  (My house is a relative youngster, built in 1814) 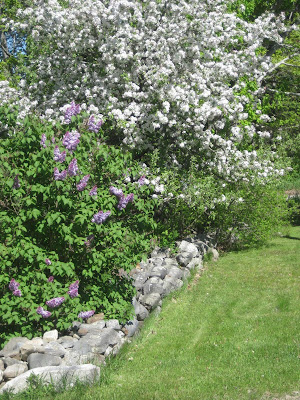 Lilacs and an apple tree in bloom along an old stone wall at the Dilettante's.  My weed whacker is broken.
It is always my favorite week of the year, and fresh raspberries are probably the only thing I love as much as I love lilacs (all the better that the raspberries ripen almost exactly on my birthday each year).
However, the lupines that give impressionistic bloom to many fields around here will be in full flower in a few days....they help soften the blow of the lilacs going by....Anyone who tries to tell you that autumn is the most beautiful time of year in Maine has simply never been here in lilac season. 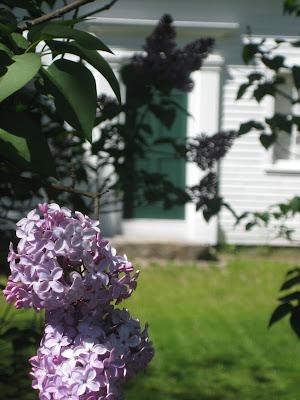 Unlike most of the East Coast, Maine had almost the mildest winter in history, and Spring, usually late, reluctant, and brief, was early and lasted long, including the lilacs, which usually bloom at the end of May, and form a beautiful backdrop for our sweet little Memorial Day parade. 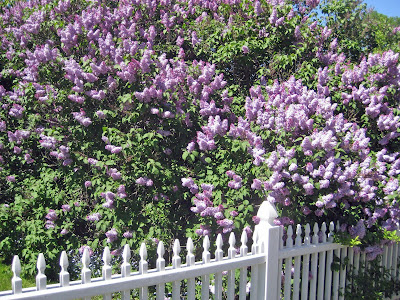 On the Main Street in our village.  Year after year, the most abundant row of lilacs in town. 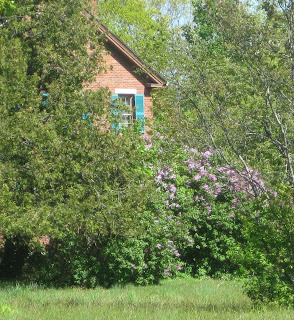 forming a fragrant buffer between this house and its meadow at the other end of Main Street
But it will be different this year, as already it seems like summer, and my field is coming into blossom with thousands of buttercups....I'm sure it means something awful about the PH balance and maintenance (or lack ) thereof, but sure is pretty.... 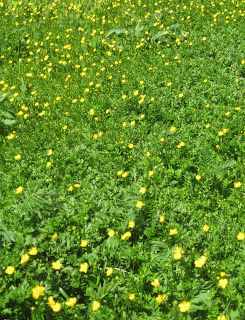 On another note, in Sunday's post about the orchard restoration at the Jonathan Fisher House, I  mentioned the scourge of Giant Maine Hooved Rats, from which no garden or young tree are safe.  I've even had commenters and emails mentioning what terror I've caused by bringing attention to these frightening predators, and asking to know more.  They indeed are relentless, these giant creatures----they can devastate young trees and gardens, and cause immeasurable loss to life and limb just by standing in the road.  Below is a picture of a mother and young hooved rat, at rest while contemplating their next act of garden carnage. 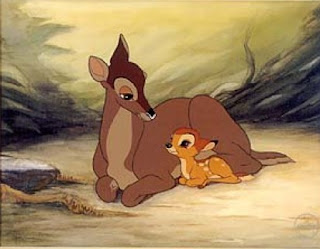 And in other news:  Here in Maine, old rowboats never die, they just become dooryard flower planters.  For those who are looking for other ideas for what to do with that leaky old dinghy, check out this post over at If The Lampshade Fits
Posted by The Down East Dilettante at 11:07 PM

I think your photos are wonderful, The Hooved Rats are too much! I still love them....

Raina, the feeling is mutual!

Karena, Someday I'm going to actually read the camera instructions and learn more about lighting and depth of field, and....

As for the Hooved Rats, they're best appreciated at the edge of the woods, where they belong...

DED: Your photos are quite lovely, as is the subject matter (those lilacs!), and your musing on the hooved-rats is hi-larious. Good job! -- Reggie

You can always tell where old houses once stood for in the spring it is abloom -- with lilacs, peonies and iris!

It's fun to go for a drive in the country!

Lilacs are indeed sublime.And their fragrance is like nothing else. The mystery of cutting them for the house eludes me, however: Smash the stems, don't smash the stems, strip the bark, don't strip the bark, pull off all the leaves, don't touch a thing- I have followed all this advice and am still puzzled at why in a large bouquet, cut from the same bush at the same time, some stems last for a week and others wilt before the afternoon is over, ruining the whole effect. And to add to the whole maddening nature of the thing, my query to fellow gardeners and flower arrangers about why this happens is invariably met with uncomprehending looks, as if I am the only person who has ever been thus afflicted. In any event, in my "neck of the woods" the peonies are in full flower. One of the glories of the year as well- especially the elusive fragrance of that old standby, Festiva Maxima. Happy spring to all.

I think I need to have bumper stickers made "I brake for lilacs." They stop me in my tracks every time. Unfortunately they do not do so well in Virginia, so this glimpse of Down East is a sight for sore eyes. And really, they don't take a bad picture...

It does not matter how many posts are written about lilacs, just to look at them, even in photographs, sends me into pure ecstacy. When I lived in Connecticut I had a fence that separated our house from our neighbors that was full of lilacs. The smell in the house was out of this world..how I miss it. I haven't seen a bush here in Georgia, and don't tell anyone I said so, but the honeysuckle is but a poor cousin of the divine lilac. thanks yet for another post!

Surely one of the best "intermissions" I have ever seen. I can simply smell the lilacs as I read.

I have just about given up gardening thanks to the rats. its a battle I'll never win.

There can never be too much lilac...unlike rats! xv

I don't want to sound like every other New Englander, but aren't the lilacs especially full this year? I grasp my bossom every time I see gigantic purple bush!

In Virginia we call the Hooved Rat something else entirely.

(When the Targets get too out of control, the friendly neighborhood gun dealer contrives a permit and comes in by night with a silent gas-powered automatic rifle.)

((Granted, this is mostly at the vineyards, but the practice is spreading.))

Martha, so true---one sees them in spots that one doesn't even think about the rest of the year

Magnus, a lilac in the house for five minutes is better than not at all? And I agree, beats me wht the system is.

Janet, I'll buy one of those bumper stickers

Daniel-Halifax, you make me laugh

Ancient, I've always thought of you as the very essence of gentle of thought, now I see another side. Those pesky giant rats do bring it out in one

Toad, I saw your post on the subject, and feel your pain

Dept. of Amplification and Clarification:

While I allow certain people to hunt on my property, I myself have never shot anything larger than a groundhog.

(Eugene McCarthy once wrote a charming essay on why, in the countryside, killing groundhogs was both a social ritual and a moral duty. Bottom line: Very large numbers of horses have to be put down because they have stepped into groundhog holes and broken their legs.)

((I will allow, however, that putting a bullet past the ear of an unrepentant deer sometimes strikes me as wasteful.))