Typical Dilettante, I've got half a dozen posts in some stage of completion, but am very busy for the next few days, so until I get there here is quick post from the files. 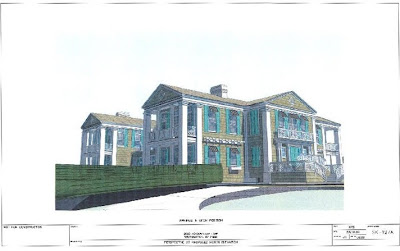 A few months ago, this architectural rendering, of a proposed house by Daniel Romualdez for fashion designer Tory Burch, to be built in one or another of the many Hamptons, was doing the internet rounds.  I saved it because I was interested in the design, of two wings terminated by porticos, forming a courtyard.  It was a popular motif in houses many years ago.  The plan offered plenty of light and air, with  3 exposures possible in many rooms, many balconies and porches for a summer afternoon, and worked well for hierarchical separation of public, family, and service areas.   Here are  a few other examples: 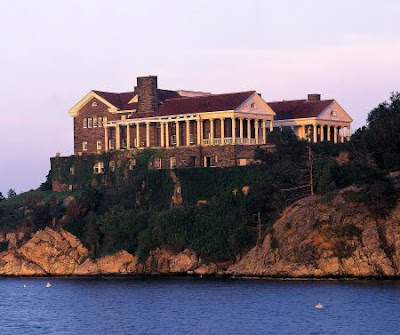 The granddaddy of them all appears to be 'Beacon Rock' in Newport, RI, designed in 1887 by McKim Mead & White for E.D. Morgan.  A very large house, with 3 floors, it was designed to appear as a one story ancient Roman villa, and was quite radical for an era still in thrall to turrets and verandas. 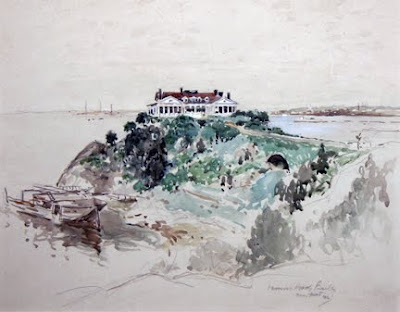 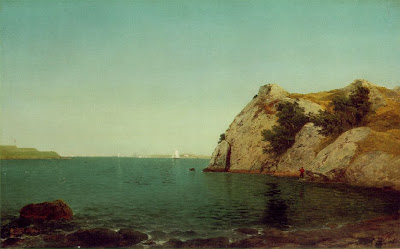 (Dilettante Tangent: Even great architecture can extract a cost.  Before its top was blasted to provide a site for the house, Beacon Rock was one of the most beloved subjects for 19th century painters visiting Newport, including luminist John Frederick Kensett who painted this sublime view in 1857) 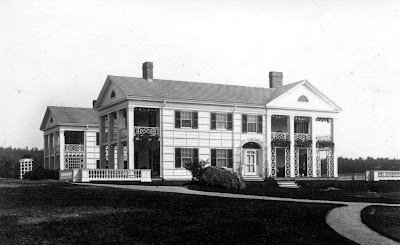 This house on the Down East coast of Maine seems to be next up in the chronology.  It was designed in 1911 as a summer cottage (seen here on an early postcard) for F.B. Richards, vice president of the M.A. Hanna Company in Cleveland, by Frank Chouteau Brown, one of the leaders of the Colonial Revival.  Here the porticos have grown to two stories, with square columns inspired by Mt. Vernon, on a house otherwise inspired, on blown-up scale, by classic New England Federals. The courtyard formed by the two wings contained a 'colonial' garden designed by Beatrix Farrand 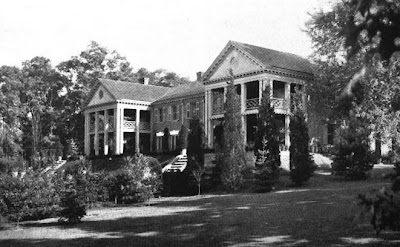 Architect Howard Major, later known for his suave tropical houses in Palm Beach, designed this Glen Cove, Long Island house in 1918 for William Beard.  Looking at this picture, one is tempted to speculate that Major had seen at least the postcard published of the Richards cottage, as his design includes not only the double porticoes with square columns, but nearly identical fretwork railings at second floor level. 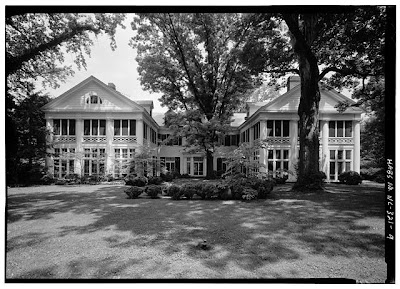 In 1919, Tobacco and Utilities magnate James B. Duke, wishing his daughter Doris to be better acquainted with her home state, as well as the Newport whirl that her mother preferred, purchased a Colonial Revival house in Charlotte, North Carolina.  He had local architect C.C. Hook triple it in size, to the present configuration.   He named the place Lynnewood, and here Doris sometimes attended local schools.  Not a man to do things by halves, Duke took the design idea to the limit, with two facades featuring the twin porticos, as it also appears does Burch's proposed house, where this ramble started.  Despite his hope that the house would foster an affection for North Carolina in young Doris, the house was sold upon his death, the only one of his four homes not retained by his widow and daughter. 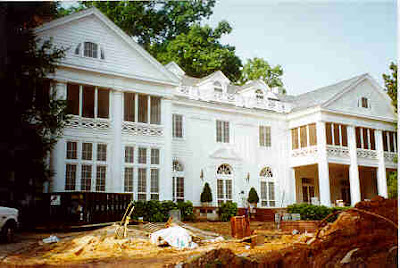 Last up, below, is a country house in Minnesota designed by the great David Adler in the 1920's for the Egil Boeckmans, she the daughter of railroad tycoon James J. Hill.  The house is pleasant, although lacking in the usual elan of Adler's work 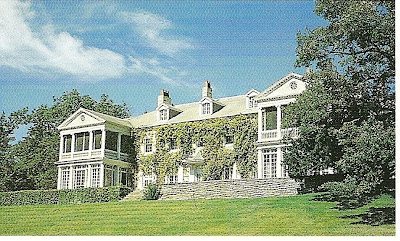 Posted by The Down East Dilettante at 10:53 AM

You will be offering a certificate program for your loyal readers at some point, right?

These are all so beautiful. Two floored porticos make me weak in the knees. And I've lived in Rhode Island since Roger William and have never been to Beacon Rock...what's wrong with me? I think Ima swim there this weekend!

Feeling a lot more erudite after reading this stunning post. Thank you.

A lovely stroll through increasingly elegant adaptations! Finale by Adler of course.

I think the Shrivers built a similar model in the 80s? But it was just one section (one long bar) with the temple two storied porches at each end and one at the front door. A very close copy of the one by Brown.

Daniel, better run fast to see it---the current owners have such seriously tacky taste that one never knows when they might paint the columns pink

It's pretty shocking to see how awful Beacon Rock is on the inside.

(Someone with money who could bear to be in Newport should buy that house and put it right.)

Ancient, as you probably know, Beacon Rock's original McKim Mead Etc. interiors were toned down by the next owner, well known, but whose name escapes me at the moment, in favor of a more Georgian feel, and then when purchased by Felix de Weldon (and how I could I forget to mention that he owned the house and had his studio in the handsome stables?), everything was status quo. Then the house was bought by a local attorney, whose intentions are clearly good, but whose taste and execution are zero. And as unbearable as Newport has become during the pleasant months, it is on the quieter side of town...and it is absolutely magical on the site.

Though I learn so much from your blog, I wonder about your suggestion of 'Beacon Rock' as "great architecture" (unless you mean merely "outsized and grand"). Would that Rhode Island (and Newport) in 1887 had the equivalent of the California Coastal Commission to preserve the natural beauty of the outcropping- or at least severely scale back the proposed residence. What an accretion this place is with its fluted pillars and Ionic (it appears) capitals caged over a stone exterior, two tall chimneys fit for "My Ole Kentucky Home", dormers, and a rather basic U-shaped floor plan. I do hope McKim Mead & White derived an immensely large fee from Mr. Morgan: presumably they gave him precisely what he desired. A movie mogul's spread on the Malibu Coast is hardly different. But, then as now, a fool and his money are soon parted.

The replication of this style, nonetheless, is easily done both on grand and average scales as your other well-documented examples show.

i like the asymmetrical change to the federal style. i think i'll put one on this place. one more thing to fix. hmmmmm - maybe not. my fave is that rear view with all the windows. i don't think EPA would approve unless south facing but screw them - it's so impressive

Ah, Bryan, I have to respectfully disagree, and also defend myself.

First, I have always been a loud voice against the tendency, rampant nowadays, to confuse grandeur and ornamentation with design quality. I find Beacon Rock, for all its quirks, a powerful work (even as I share your lament about the desecration of the site). Beacon Rock's design is based upon a powerful idea---a classical villa by the sea, has an ocean facade that is wonderfully organic, of the very stone that forms the outcropping, combined with an interesting and organic floor plan. I'm assuming you are familiar with the house from other than just the photo I've included, but if not, go to the McKim Mead & White monograph, and examine it. The classical courtyard is beautifully detailed and executed, and the ocean facade powerful. I think it's a terrific building, and surprisingly imaginative in the contest of its time---not a masterwork, but definitely a work of interest by master architects.

And then there's that whole other kettle of fish---the site. So many buildings that would never have been built under today's excellent and important environmental laws---Fallingwater, for example, or the beloved Motif #1 in Rockport Massachussets, Chenonceaux....

Absolutely grandeur and ornamentation do not alone make good architecture, but neither necessarily does the lack thereof.

As always, you display your knowledge for all of us to learn in a reader friendly manner. Bravo :-)
I LOVE tory burch's house and can imagine spending so many pleasant summer weekends there (if only). Any room with 3 exposures is heaven in my book and the house, at least in the rendering, is just beautiful. We'll see what actually gets built though! So often there is what is shown in early design and for approval and what actually gets built. Lets not even start to talk about quality of construction!

PS Don't be intermissed for too long.

Thanks kindly for your wonderfully phrased reply, though you had no need to defend what is simply a difference of taste. Actually, the photo brought back a long-forgotten memory of my importuning my college sailing partner to make multiple tacks and jibes around Beacon Rock for my own architectural mania. At the time I knew the house to be McKim Mead & White, though not its original owners. I agree the siting is excellent. I am sorry I cannot like the stonework and windows of the ocean facade, for I felt then (and do still) that the exceptional seaward vista deserved the classically inspired embrace of the wings with those pristine white temple columns (I think the Athens Stoa was a model). I agree a seaside villa is a wonderful concept, but Stanford White turned the best side away from the sea so as to impress the visitor from the land. The Olmstead grounds are still lovely though- thankfully the present owners understand what to leave alone.