Asher Benjamin in Maine: A Note About the Blog Header 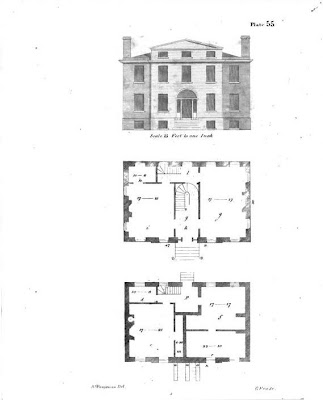 The picture at the head of this blog is a section of plate 25 from Asher Benjamin's Country Builder's Assistant, the first American builder's manual, published in 1797.  This volume, as well as Benjamin's subsequent books, was to have a great influence on the design of buildings in the early years of the United States, helping to popularize the neoclassical style we now call Federal, followed by the Greek Revival.  Borrowing shamelessly from English builder's manuals, Benjamin's practical adaptations nevertheless gave his designs a uniquely American twist.  As architectural historian James O'Gorman has noted, Asher Benjamin was not so much a proponent of the neoclassical as he was an admirer of Neatness & Newness.
Virtually every town in New England can boast at least one beautiful, sparely proportioned building that some talented, now often anonymous, house wright built before the industrial age, using one of Benjamin's books as inspiration.  Using the rules for proportions and detail set forth in these books, it was practically impossible to design an ugly building, and many were in fact sublime, spare of line, elegant in detail, and defined the architectural style of New England for years to come.  For more about Asher Benjamin, click here 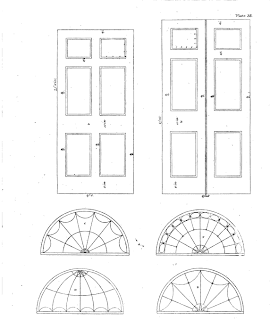 Changing tastes and the last decade of affluence have not always been kind to Benjamin's designs.  In rural Maine, hardly a day goes by that a lovely Benjamin-inspired doorway doesn't disappear, replaced with good intentions by something from Home Depot.  This is a horrible loss to the built landscape, the handwork and art of craftsmen past, to mass production and cheap materials
Posted by The Down East Dilettante at 5:43 PM