It is snowing fiercely today, so I'm housebound, and torn between cleaning up a gigantic desk mess, or browsing through picture books, I've chosen the books, fully aware that I'll pay later, when the piles on the desk fall over on the floor, or they spontaneously combust. 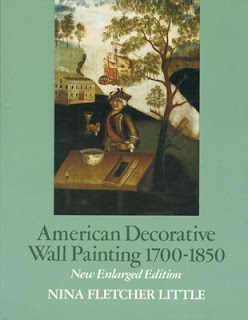 The book that has most caught my attention this afternoon is an old favorite,  American Decorative Wall Painting, 1700-1850, by Nina Fletcher Little.  You may wonder how the Dilettante acquired his fascination for design sources.  Well, it was as a little lad, sitting inside on rainy days, alternately reading Nina Fletcher Little or the Hardy Boys----when my nose wasn't poked deep into the chic, lush photos of House & Gardens Second Book of Interior Decoration, but that's another post.

This groundbreaking study of early American interior decorative motifs, sometimes beautiful, sometimes weird,  brought the naive, sometimes ambitious,  early American attempts at European style decoration to the fore. She was a prodigious researcher and detective, and for 65 years was constantly scooping herself, discovering another obscure folk artist, finding the design source for an American building. tracing the allegorical history of a piece of a printed textile.  I cannot say it better than this bit of promotional copy for her posthumous collecting autobiography Little by Little :
NINA FLETCHER LITTLE spent over sixty years collecting and writing about New England antiques until her death in 1993. Her "special contribution was to bridge the worlds of American antiques and folk art, bringing the antiquarian's passion for the past to the study of folk art. She combined a keen appreciation of the aesthetic qualities of an object with a determination to discover everything possible about the historical and social context in which it was created -- who made it, when and where, how it was used and by whom. For her there was no contest between object and context: she honored both."

I always looked forward to her many magazine articles, amazed by her resourcefulness and intellect, her new discoveries, and her excellent narrative style, which kept the subject from being dry.  One shared her enthusiasm and sense of discovery, and from her writings, I learned a new way of considering objects and their place in the world, and developed my own curiosity about design sources.
With her husband, Bertram K. Little, for many years the Director of Historic New England , the organization formerly known as SPNEA, she formed an extraordinary and pioneering collection of New England Folk art.  The Littles displayed the collection at their summer home, Cogswell's Grant,  an impossibly romantic 18th c. 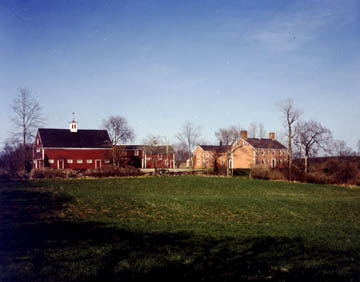 
New England farm hidden away at the edge of the marshes in Essex Massachusetts.  Although 'country' and 'folk art' are two words that can make my blood freeze when spoken of as interior decoration (all those painted goose cutouts, those herbal wreathes, those homespun checks...ugh), the Little's collection was something else, almost spiritual, as displayed in the timeworn old farmhouse.  At their deaths, both in 1990, The Littles left house, farm, and collection  to Historic New England.  Historic New England is also the steward of famous Beauport, a few miles down the road in Gloucester.  The two are well worth a summer road trip, to experience two highly personal presentation of the decorative arts of New England. 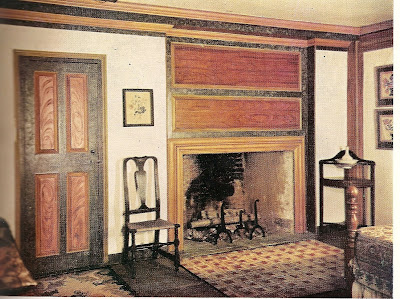 A bedroom in the Little's country house, Cogswell's Grant, with the 18th century grained and marbleized woodwork that sparked her interest in early wall decoration.
FOOTNOTE:  Here is one of my own 'eureka' moments.   This is a little painting that I can't live without.  It is a small primitive oil on canvas, very shabby, of a shipwreck, by some anonymous 1850's painter.  I  bought it at the age of 14, at a country auction I attended with my father at a run down Charles Addams-ish Victorian mansion in Hampden, Maine.   The auction was mostly the usual banal carved mahogany furniture and gold bordered china one would expect in railroad president's house.  Sitting outside on the unshaded lawn, getting the worst sunburn of my life on my knees, I watched the usual buffets and gilt mirrors go up, when suddenly, a very dirty stack of small paintings came down from the attic. They were mostly ho-hum Hudson River style landscapes.  This one was on the bottom, and it was love at first sight---the almost abstract composition, combined with sure brushstrokes, skillfully rendered dawn on the horizon, and vividly real storm colors.  For $11.00 the stack was mine. 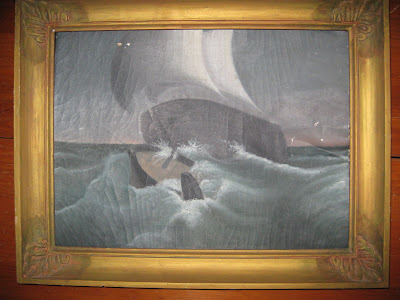 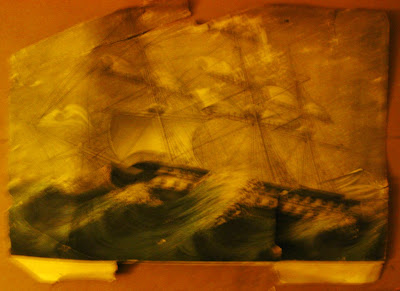 I'd lived with the painting for 25 years, when, in the course of removing antiques I'd purchased from a house a mile from me, this tattered Currier & Ives appeared folded in a pile of papers in the attic.  Imagine my surprise.  I'd found the source of my painting.

Posted by The Down East Dilettante at 6:54 PM

What a brilliant find! Enjoy those books...a good choice I think. The desk piles are for after the holidays ~ there is plenty of time for new year's resolutions. Enjoy these quiet days of snow and peace!

Am enjoying your blog immensely. Thank you for such thoughtful and informative commentary. Do come and see mine, I am now a "follower" of yours...

It is always a special day,I enjoy many, to delve into books that call out on the shelves. I am finding the Early Americana things very pleasing in this messy revival of 50's and 60's kitsch- not good then. G

In any case, regardless of whether you can envision the idea driving on the web check liquidating or not, the innovation really exists. Check Cashing chicago