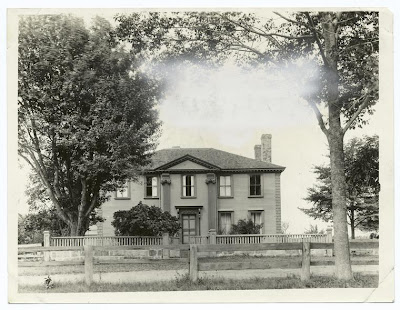 
General Sir William Pepperell (1696-1759), the hero of Louisburg, was the first American born baronet, and the richest man in what was then the Province of Maine.  He lived comfortably but unpretentiously in his family's commodious old house, built in 1682 near the shipyards and fish houses that helped fuel his fortune. 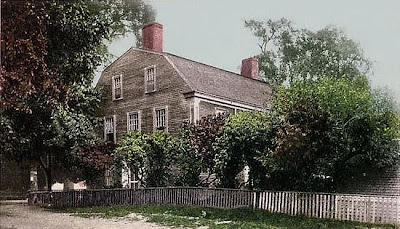 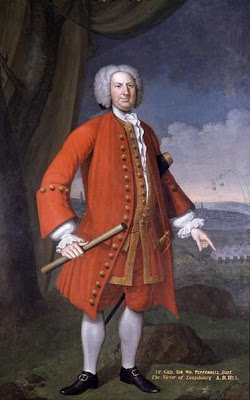 After his death, his widow, the former Mary Hirst, built a dower house a mile from the old mansion. This small, forthright mansion with its bold ionic pilasters on under a central pediment, is one of the loveliest houses in Maine.  The bracketed doorway features two intertwined dolphins.  On this basis, the house has often been attributed to Peter Harrison, the English architect of King's Chapel in Boston, and the Redwood Library in Newport, as have the Apthorp and Longfellow houses in Cambridge, which share similar compositions and details with the Pepperell House. 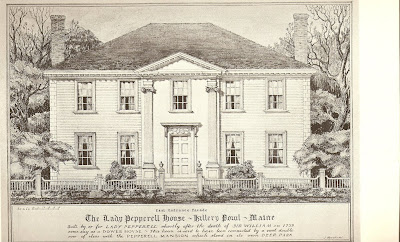 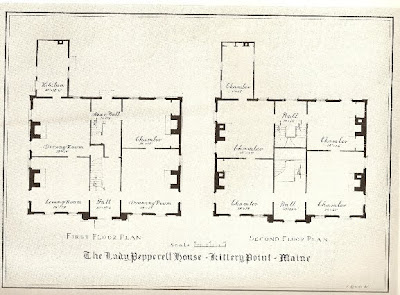 Elevation Drawing and Floor Plan of Lady Pepperell House (from Great Georgian Houses of America, published by the Architects's Emergency Committee, 1933)
The floor plan is a classic simple 18th century plan, center hall, front and back stairs, 2 rooms on each side.  The importance of the rooms is indicated by their relative size. The windows are large, and flood the house with light.  While some could quibble with individual details of the design----windows crowd the central pavilion, for example---the overall effect of the house, with its bold details casting high relief shadows, is stunning.

Inside, the house features handsome simple rooms, beautiful cornices, deep windows with folding shutters and window seats. a staircase with twisted balusters, and simple paneled chimney breasts projecting into the rooms between windows to handsome effect. 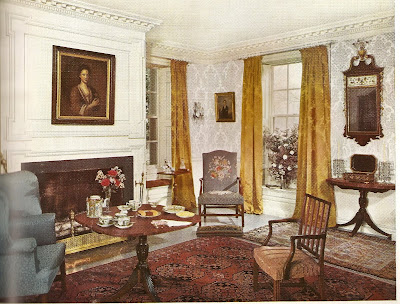 Drawing Room, Lady Pepperell House, 1940's view.  Photograph by Ezra Stoller for Ladies Home Journal
After Lady Pepperell's death, the house went through various owners.  In the 1920's, noted architect John Mead Howells*, son of William Dean Howells, who summered down the road, undertook a restoration for the new owners, who were to use it as a summer residence.  He added a matching pair of ionic porches to the sides, a bit  fussy for the strong lines of the house.  The house was left to the Society for The Preservation of New England Antiquities (SPNEA, now unfortunately renamed Historic New England in an attempt to be more relevant), who operated it as a house museum.  Under visited, and it's endowment fund too small, the house was sold to private buyers in the 1970's, with substantial deed protections.  A restoration of the interior was undertaken by the new owners, including reproduction of original wallpapers from surviving fragments. 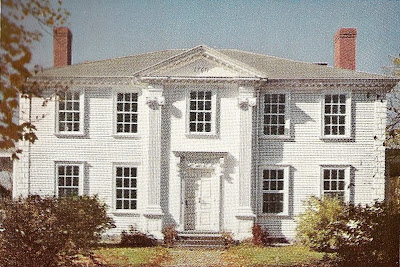 
As for Lady Pepperell, her name lives on in a famous line of bed linens. 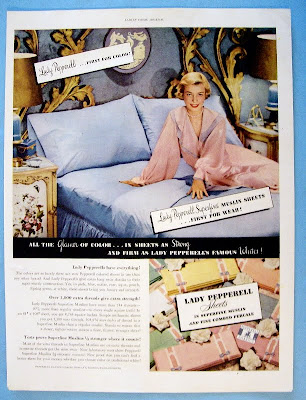 *Interesting side note:  Howells was a Beaux Arts trained architect.  In the early 20th century, he was a major figure in the revival of interest in early American architecture, publishing several influential books, including The Architectural Heritage of the Piscataqua, and Lost Examples of Colonial Architecture .  Howells must have felt some ambiguity about the porches he added to the Lady Pepperell House, as he included an early shot of the house in Lost Examples, with the caption noting that it showed the appearance of the house before porches were added.  In his professional career, Howells worked not in the colonial styles he did so much to popularize, but instead was a major figure in the modernist skyscraper movement.
Posted by The Down East Dilettante at 11:46 AM

Such an extraordinary house...hard to imagine how truly impressive it must have seemed when first built!

It takes my breath away every time I pass it.

Have you ever done the Portsmouth tour, Miss Janet? If not, you should make it a priority.

The post is written in very a good manner and it entails many useful information for me. I am happy to find your distinguished way of writing the post. Now you make it easy for me to understand and implement the concept.Limo Servce Atlanta

Just like in brick and mortar stores you can also find discount shopping online as like anything else you can find anything you want with only a few clicks of the mouse. While the brick-and-mortar is a plus for getting outdoors it can also be inconvenient and stressful.reisbureau online zocht je?

In the relatively recent past, liquidating checks implied anguishing long queues in banks, just to find that your check couldn't be gotten the money for when you achieve the teller. https://www.usapaydayloanstore.com/chicago