In 1912 widowed banker E.T. Stotesbury, the senior partner of the Philadelphia office of the Morgan Bank, and one of the country's richest men, married the charming widow Lucretia Roberts Cromwell. 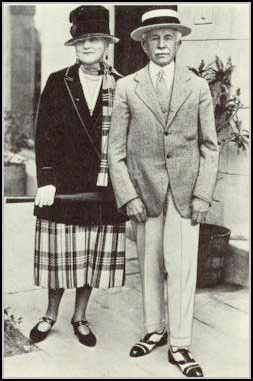 Hitherto a reserved and prudent man, whose greatest luxury was his fine stable, Mr. Stotesbury embarked on a spending spree with his new bride, building mansions and palaces from Bar Harbor to Palm Beach, buying Mrs. Stotesbury some world class jewelry, the yacht Nedeva, and entertaining non-stop.  After having Horace Trumbauer remodel his Philadelphia townhouse, Stotesbury then engaged Trumbauer to build Whitemarsh Hall in Springfield Township, PA, one of the largest and most lavish houses ever built in America. 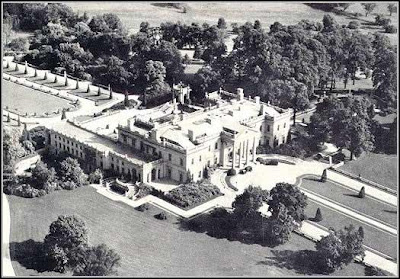 Whitemarsh Hall
Next, the Happiest Spendthrifts turned their eyes toward Palm Beach, where they commissioned Trumbauer to build an oceanfront palace.  At about the same time, wild man architect Addison Mizner electrified Palm Beach with the design of the new Everglades Club, in Spanish style.  Trumbauer was dismissed, and Mrs. Stotesbury hired Mizner to design a lavish Spanish villa, El Mirasol, which immediately became THE house in Palm Beach--until usurped by Marjorie Merriweather Post's Mar a Lago---but that's another story.
By this time, the 20's were roaring in.  Already in possession of the grandest houses in Philadelphia and Palm Beach, Mrs. Stotesbury turned her attention to her summer housing. And here our story begins:
In the late 19th century, Bar Harbor, Maine, was considered second only to Newport as a Social resort.  Always considered the simpler, less showy counterpart, Bar Harbor never went in for Newport-style palace building.  But, by any other standard the hills and shores of Mt. Desert Island, where Bar Harbor is located, were littered with cottages that ranged in size from merely large to vast.  These cottages were built in most of the popular styles of the day--shingle cottages, Italian villas, Norman castles, Tudor manors and other styles too frightening to mention, designed by some of the leading architects of the day for some of the leading families of the day.
Mr. Stotesbury had summered in Bar Harbor for years, and owned Bar Island, just off-shore from town. He and Mrs. Stotesbury were comfortably ensconced in leased quarters, the Warner Leeds estate, Greenway Court out on the Ocean Drive.

Comfortable though Greenway Court was, Mrs. Stotesbury had other ideas, and the couple purchased 'Four Acres', the estate of Mary Cassatt's brother Alexander, the late president of the Pennsylvania Railroad.  The Cassatt estate had been well designed 20 years earlier in an arts & crafts idiom by the Boston firm of Chapman & Frazer (architects, incidentally of George Bush's Kennebunkport summer home).  Finding it dark, dated, and unfashionable, Mrs. Stotesbury ordered a remodel, summoning the fashionable Palm Beach architect Howard Major, noted for his understated classical style.
Mrs. Stotesbury had fallen in love with the simple white clapboard colonial and Federal houses of New England, particularly the Nichols-Sortwell House in Wiscassett, and wished her Maine cottage to resemble them.
Be careful what you wish for.  Major's proposals were vaguely unsatisfying to Mrs. Stotesbury, and in the mid 1920's she was introduced to Louis Magaziner, of the firm Magaziner, Eberhard, & Harris, with the idea that he might be able to help resolve her design issues.  Supplied by Mrs. Stotesbury with books and postcards of the New England buildings she particularly admired, Mr. Magaziner, whose firm was hitherto best known for theatre design, went to work synthesizing her ideas and overlaying them on the footprint of the Cassatt house.
Just as things were going well, Lord Duveen, the legendary English art dealer with a particular talent for parting Fricks, Huntingtons, Mellons, Wideners, and Stotesburys from their money, offered Mrs. Stotesbury a suite of Adam furniture from a ducal family.  Having no other place to put it, it was decided that the design for the 'big room' at the new Bar Harbor house should be enlarged to house the set.  With this change, the entire design, already under construction, had to be scaled up and reworked, and this is apparently the moment that things went out of control.
When  finished in 1926, the Stotesbury cottage was a huge, slightly incoherent agglomeration of details borrowed from a dozen famous New England houses----an architectural compendium of greatest hits of the 1780's-1820's. albeit beautifully crafted with lovely individual details.  Over 1,000,000 pre-Depression dollars ($24,000,000 in today's money)  had been spent.  Full grown elm trees were found and uprooted from their original site, transported to Wingwood. Technology was up to the minute, with all the luxuries of the day---three furnaces to take off the chill on a foggy day by the shore, a 53 line house telephone system, 20-odd bathrooms, hidden motion picture projection equipment in the 60 foot ballroom, electric wall heaters for the bathrooms, a 38 room service wing built around a courtyard, and two elevators.  An article in Town & Country declared it to be the largest Colonial style house in America, a dubious title that probably belonged to Marion Davies Santa Monica Beach House. But let's not split hairs---there is no doubt that the Stotesbury's summer cottage, like their other houses, was Huge, and designed to Impress.
Whatever her exterior desires, the simple pleasures of colonial design were not for the imperial Mrs. Stotesbury's interiors.  In  the principle rooms, the giddy mix included an arcaded entrance gallery with gothick benches, a Louis XVI reception room that led from the Georgian hall to the Adamesque Garden (Ball) Room, and a Chinese Chippendale Drawing Room, all hiding behind the New England facade. There were 18 fireplaces, many sporting superb 18th English Marble chimney pieces.
More about Wingwood  in two future posts, in which we first examine the design sources of the exterior, and then go inside to 'ooh' and 'ahh' at the highly decorated interiors.
For Part 2 of Wingwood House, Click Here:
http://thedowneastdilettante.blogspot.com/2009/12/summer-delirium-colonial-style-part-2.html

And for Part 3, With Interior view, click here:
http://thedowneastdilettante.blogspot.com/2009/12/summer-delirium-colonial-style-part-3.html
Posted by The Down East Dilettante at 2:24 PM

Since both E.T. Stotesbury and Lucretia Roberts Cromwell did not look to be in the flush of youth at their wedding, can we assume they did not have children together? If not, what happened to their fabulous houses, paintings, furniture, garden estates and every other thing?

The timing (1912 and on) is perfect for me. I am in the middle of a course on 1st class passengers on the Titanic in 1912. The students are searching for the treasures of the Astors, Wideners, Guggenheims etc, to see if the objects ended up in private homes or in public collections.

While I can't say where the items in the Stotesbury house went, you might try contacting Debbie Dyer at the Bar Harbor Historical Society. The house itself was torn down and replaced by the Bar harbor Ferry terminal.
In 1947 a huge forest fire ravaged much of Bar Harbor and its summer cottages and other homes, miraculously leaving the downtown as well as the homes along Eden Street, where the Stotesbury cottage was located, unscathed.

@Hels: The fate of the Maine mansion is covered in DownEaster's later two posts on the subject. Their Philadelphia "country home", Whitemarsh Hall was sadly demolished in 1979, but is well-documented on the web. Their Palm Beach home, the Addison Mizner-designed el Mirasol remains, as does (as I just found out) their town house on Walnut St in Philadelphia.

If you are interested in the Wideners and Elkinses, you'll be happy to know that their mansions, Lynnewood Hall, Elstowe Manor and Chelten House all stand facing each other in Elkins Park.

The excellent collection of 18th century English paintings from Whitemarsh Hall now hang in the Philadelphia Museum of Art. The rest of the contents were auction by Freeman's.

I am in love.. thank you. What an excellent collection of 18th century English art. The collection seems to have been kept together, another plus.