One of the intriguing aspects of the E.T. Stotesbury summer cottage in Bar Harbor,  also discussed in a previous post, is the giddy borrowing by Mrs. Stotesbury and her architects of details from famous New England houses of the Federal era.  Although the house was not itself a masterpiece, it was beautifully crafted, and individual details were often lovely, despite the awkwardness of scale and proportion between many elements. 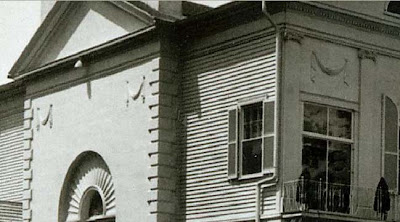 We know that Mrs. Stotesbury admired the Nickels-Sortwell House in Wiscassett, and a photograph of that house exists with notes by Mrs. Stotesbury about how much she admired its entrance, which would be cribbed for Wingwood. It is not a great leap to wonder if she ever consulted Fiske Kimball for ideas about great New England buildings for inspiration at Wingwood.  Well known to her as the director of the Philadelphia Museum of Art, Kimball was an expert about early American architecture, and would eventually publish the definitive book about Samuel McIntire, the Salem architect-carver whose buildings would be heavily mined for details for Wingwood.
The overall massing of Wingwood's garden front, with its wings forming a forecourt owes a great deal to Samuel McIntire's design for the Elias Hasket Derby mansin of 1795 in Salem, one of the grandest houses of Federalist America. 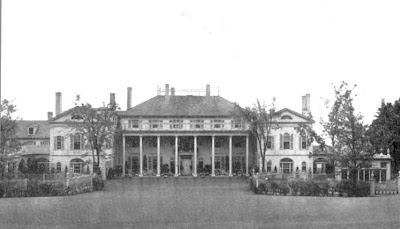 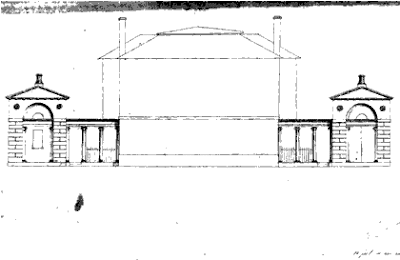 The main block featured a two story colonnade, with balustrade copied from a house in  Lost behind the portico, was another, a copy of the Nickels-Sortwell portico and Palladian Window. 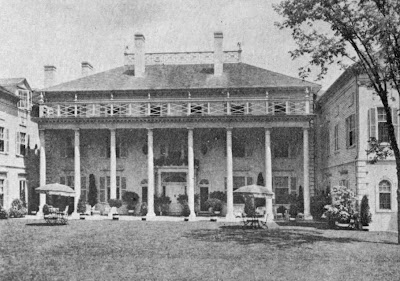 Something was lost in the translation--the composition was fussed up with two poorly scaled arched  windows on either side of the door, and two oval bathroom windows flanking the upper Palladian window.  Further, the door was false,  fronting the circular staircase in the Red Hall beyond, and the small arched windows were actually the doors to the hall. 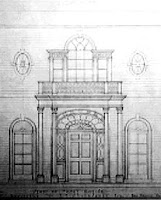 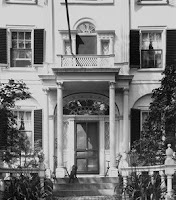 Wingwood, false door on garden facade (R), and prototype at Nickels-Sortwell House (L)
The two flanking wings, awkwardly scaled in relation to the main block, were blown up versions of McIntire's famous summer house for Elias Hasket Derby's country estate.  Much wider than their prototype, the wings lost in the translation, with pasted on facades that did not 'return' on the sides.

(L) Wingwood, Garden Wing; (R) Derby Summerhouse, 1797
Spreading out from the McIntire wings were two arcaded galleries, one an entrance corridor, the other a long passage to a tea room.  These also were based on a similar feature at the Derby mansion.
Finally, many leagues away from the Sortwell doorway, the arcade wings ended in two pavilions, one a porte cochére, the other a tea room opening into a 'colonial' formal garden designed by noted landscape architect Beatrix Farrand, a Bar Harbor neighbor.  The rusticated facades of these pavilions, inspired by pavilions in Sweden,  left the American neoclassical behind,  but in their roof design takes us on an unexpected detour to the early 18th century south, and the famous roofs on the flankers at Mulberry Plantation outside Charleston SC, a long way from Wiscassett, Maine. 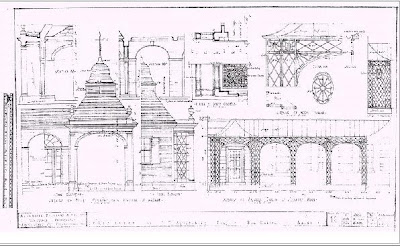 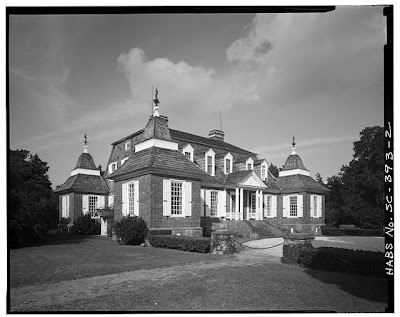 Turning to the ocean front, one finds the window entablatures, and the side door from the Chippendale room are copies of details from houses near the Nickels House in Wiscassett, and of a pure Maine federal sensibility.  The McIntire summerhouse facades re-appear on  the wings.  A giant Palladian window in the ballroom wing has no early American precedent, but is borrowed from a London design of Robert Adam. 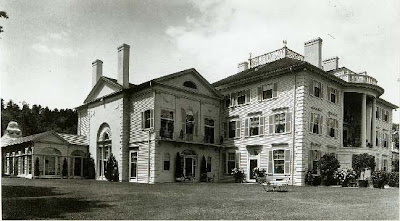 Finally, in the center of the main block, the giant curved portico, two recessed stories above a rusticated ovoid base, is directly based on both a similar feature in McIntire's Derby Mansion, and Charles Bulfinch's Joseph Barrell House in Charlestown, Massachusetts, later remodeled as the McLean asylum. Deterring from the composition is a wide fourth floor level dormer giving access to the portico roof. 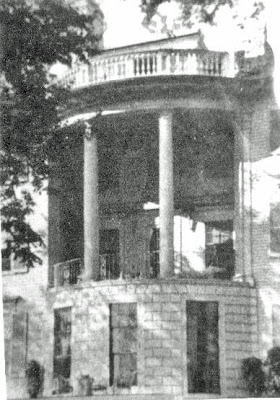 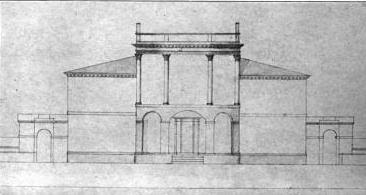 No doubt the decision to remodel the Cassatt cottage rather than build anew, combined with the mid-design change in architects and program, and Mrs. Stotesbury's general preference for grandeur, did not help the project.  It would probably have been better if the design had started from scratch. Nevertheless, Wingwood is an interesting footnote to an era and to it's owner's sensibilities. 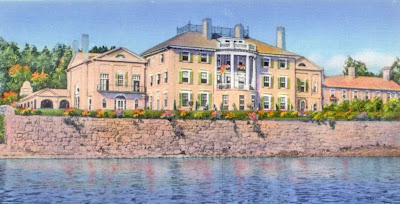 Wingwood.  Vintage postcard view, 1930's.
I'll give you a couple of days to recover from this post, and finish up with a less talkative  tour of the interior, where the pictures speak for themselves, and we get to count the Stotesbury's silver flatware.

Very much so, Anonymous, I agree--and very much the same sensibility at work.

Attempting to turn a dog into a cat never works. While details of the fine-as-it-was Cassatt house remuddling are not bad, the overall effect is bloated, overwrought and bizarre. I agree that the Stotesburys should have started from scratch. Of all their lost mansions, Wingwood summons no tears.

One is reminded of Fair Lane, Henry Ford's 1909 misadventure in mansion architecture at Dearborn, Michigan. It began with a Frank Lloyd Wright inspired layout, then was radically reconceived mid-construction after Ford's visit to English castles. The result might best be called Prairie-style Tudor; in other words, a deluxe mongrel. Money can blind a client to a simple truth -- leave architecture to professionals.